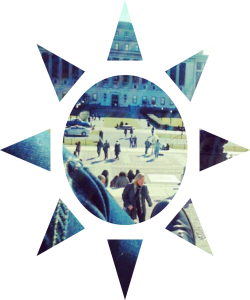 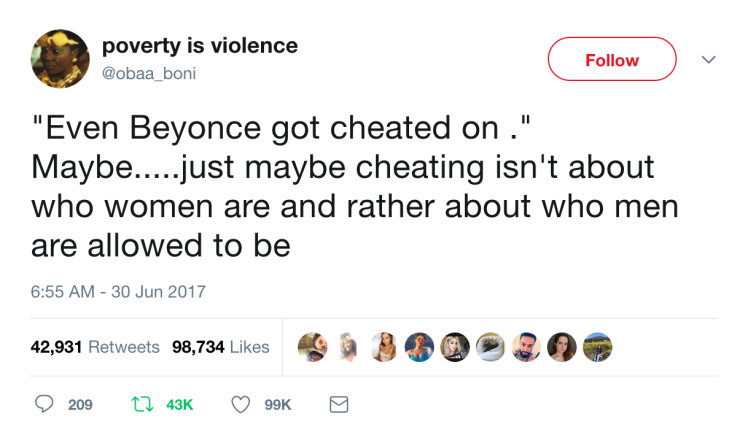 Shout out to black twitter because nobody knows how to shade other people like black people (cue Maxine Waters and her no non-sense attitude). The real MVP of black twitter this week is the tweet above addressing Jay-z new album which confirms that he cheated on Beyoncé and the implication of that cheating. To really dissect this topic, I would like to revisit the scandal of April when Carmelo Anthony (basketball player for the New York Knicks) stated that the reason he cheats on his wife, Lala, is because she is married and he is not. Let’s run that again, he said that his wife who he walked down the isle with is married but he is not. Either there’s something wrong with the water in New York cause Jay-z hails from Brooklyn or these men have some mental retardation. But the worst part is that apparently Carmelo has been cheating for a long time with Lala knowing about it and this month, she dropped the divorce to continue in her half-sided marriage.

Just to make sure y’all don’t think this is a black phenomenon, let’s cue Hillary and her man Bill ( I don’t even need to drop the last name here). Bill embarrassed Hillary with his cheating on a national scale and she still took his sweet talking presidential butt back (some may argue Hillary did it because she had her eyes on the prize but considering she lost the election last year, girl was he worth taking back?!)

So let’s revisit that tweet. It drives the point home that “cheating isn’t about who women are but who men are allowed to be”. Men are allowed to gaze at other women. Men are allowed to come home late and say they spent the evening at the office. Men are allowed to go on so called business trips when you know he’s at the hotel downtown with another woman. Men are allowed to disrespect marriage while women are pushed to uphold it all costs. That’s not fair. If we’re married, we’re both married. We both state vows that are supposed to be upheld in sickness and in health, till death do us part. If you cheat in a marriage that should be considered death and us women should walk away with our dignity in tact and hopefully a nice alimony check.

I am tired of this “he cheated and she still stayed” narrative. It’s a narrative that is as old as Adam and Eve. Just as God punished Adam and Eve for cheating him with Satan, there should be a consequence for cheating in marriage. Maybe there should be a separate hell for those who cheat that is like 50 degrees higher than normal hell. Who knows what the solution is but all I know is that if my future husband cheats on me that will be my cue to throw his clothes out on the lawn and change the locks cause he won’t be welcome in the house ever again.